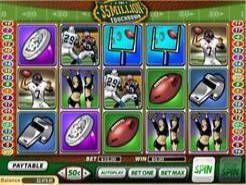 Play Now
If you caught the use of the word ‘touchdown’ in the title, you would certainly have guessed at a sporting theme here. You’d be right about that, too, as this has some icons based around an American football theme. Even if you’re not the sporting type, you’ll want to see if you can win some prizes by taking part in this game. You can do so from the comfort of your armchair, after all!

Reels and lines in play

5 Million Dollar Touchdown presents you with five reels in this video slot, and adds in 20 paylines for good measure, too.

Bet amounts you can use

You can look forward to lots of variety in your bet amounts. Coins go from a cent each to $5, although you can play just one coin on each line.

You’d expect to see a referee during a game like this, and he does appear in this slot game as the wild symbol. The only symbol the referee cannot replace is the scatter, and this simply uses the word scatter.

If you can find at least three of those scatters on the reels, you can look forward to playing your way through some free spins – 15 of them in all. But there is more to this game than some free spins. You also get the chance to unlock a bonus game by finding two or more targets on the reels. The target is the bonus icon. The bonus feature is a pyramid-style game, which has eight levels. You must try and pass through each level by finding a cash amount and avoiding the position that does not have a player on it. If you pick the wrong square, it is game over and you take the winnings you have got up to that stage.

5 Million Dollar Touchdown may not have any million-dollar prizes to offer the player, but it does have enough included in it to appeal to those who like bonus features. It is always nice to see free spins alongside another bonus, and that is what you get here. It may not be in 3D, but it does offer players some nice perks and prizes to watch out for.
Play Now