Prizes Galore Up for Grabs in Independence Day Slot Game 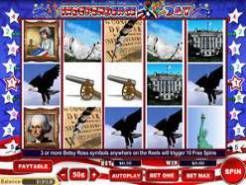 Play Now
Vegas Technology has created some truly amazing slot games in recent years. This one, as you might guess from the title, is themed for independence in America, and contains some very relevant symbols as a result. With fewer paylines than you might think, it is also a great game for players who are only just starting to try out five-reel slots.

This game has five reels, as we’ve mentioned before. It also has nine paylines – a lot less than many other games online today.

You can choose a variety of coin values from a cent to $10. Only one coin is playable per line, which means you can spin the reels and play all the lines from as little as nine cents per go.

Does Independence Day have some special symbols in play?

It does indeed. Firstly, there is the wild symbol. This is none other than George Washington. Betsy Ross acts as the scatter, and will pay out anywhere on the reels if you get the right number of them. Additionally, Betsy Ross can trigger 10 free spins for you if you have three of them appearing on the reels.

If you thought the free spins were the sum total of the bonuses available in Independence Day, think again. You also have a chance to trigger a real bonus round if you can find three Declaration of Independence symbols on a payline you have bet on. If this should happen, you can reveal the second screen on which the bonus round is played. This takes part in three stages. They relate to the founding fathers of America, various American cities and notable landmarks in the country. You have to choose one from each stage to determine what reward you might get.

Download and have some fun playing Independence Day slots today!

Explore America and American culture and symbols in a way you have never done before, simply by playing Independence Day slots now. This is a superb game and features the red, white and blue colors of the American Stars and Stripes flag. Have a sense of patriotism and check out this amazing game from Vegas Technology now. It really does deliver a great gaming experience.
Play Now