Dare You Visit the Haunted Reels? 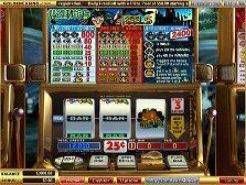 Play Now
When it comes to online slot games, some themes are used far more than others. There’s probably a good chance you’ve come across a haunted theme at some point, for example. The one in play here is called Haunted Reels and it was created by Wager Gaming Technology – a reliable outfit if ever there was one. The Halloween theme is inspiring here, giving you plenty of appropriate symbols to look for as you spin.

This is a basic game with three reels to spin and just the one payline to wager money on.

As this is a single-payline game, the minimum bet is a little higher than it would be on penny slots. However, it is still only 10 cents, so it’s not that big. You could increase that to as much as $10 if you wanted to. As is the case with many of these games, you can choose from one to three coins per payline.

Does Haunted Reels have some special symbols in play?

It does indeed – there is a wild that is quite appropriately taken up by the witch. She can also win you some significant prizes, because she will double any prize if you get one witch in the winning combination. Get two and you will enjoy a 4x multiplier on that prize. The biggest prize is triggered if you get three witches on the payline for a three-coin bet. In this situation you will win 2,400 coins.

Maybe you’re thinking there isn’t going to be a bonus round, because this is a mere three-reel game. In many instances you’d be right – but not in this case. Here, you do get a bonus round, but you will need to play three coins to be in with a chance of triggering that round. In order to do so, one pumpkin must be found on the third reel. Once this happens, you will be taken to the second screen to play the bonus. Here you are requested to pick one of the boxes that you are presented with. You’ll get a prize in doing so, which is good for you.

Haunted Reels may be a three-reel game, but it is still very enjoyable. Brave the reels today and see if the witch can help you win a prize.
Play Now