Head Back into the Past with the Lucky Lady Slot 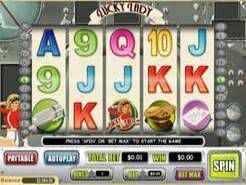 Play Now
World War II wouldn’t appear to be the most well-chosen of themes for a slot game . However, this game has focused on the air force as its theme, and it works rather well. Coming from Cryptologic, the game allows you to bet a maximum of nine coins per spin, which means it should be popular for new players to try. Check out our review of this basic yet appealing slot game now.

What number of reels and paylines can you expect to see?

With five reels in action, you’d expect to see more than nine lines in play, which is the case here. However, there are many perks to playing this game, as you will find out.

What can you bet on the real-money version of the game?

Since there are fewer lines to bet on, the lowest coin bet is higher than normal at ten cents a go. The highest coin value is set at five dollars, making $45 the highest total bet per spin.

Does Lucky Lady have any special symbols in play?

The Lucky Lady herself is the wild symbol in this game. She can pop up anywhere on the middle three reels, but never appears on the two outer ones. She can also substitute for everything else in the game with one exception – the plane. The insignia is the scatter symbol, and as with all scatters, it can pop up anywhere and win you a prize if you get two or more.

Does the slot game have a bonus round?

There is a third symbol worth watching for, and this can also appear scattered across the board. This is the plane, and it is capable of unlocking from one to three bonus rounds. This basically means you can get one, two or three attempts at winning it. The bonus screen shows you five fighter planes in the sky. Click on them in turn to reveal your prizes – and remember, you could play this round up to three times, depending on the number of planes you had to trigger the round to begin with.

This is a superb game and the bonus round’s ability to be played more than once in a row is a nice feature we haven’t seen elsewhere. Try your luck with Lucky Lady today and see if she is lucky for you!
Play Now