Will the Monkey Bring You Luck in Cool Bananas? 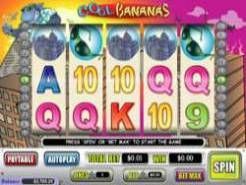 Play Now
Take a closer look at the Cool Bananas screen and you might realize this game is based on a famous film of a few decades ago. However, the similarity stops there, as the idea has been used as inspiration rather than being based on the exact film. That’s why you will see a monster monkey instead of an ape. Now we’ve cleared that up, let’s see exactly what else you should expect when you play Cool Bananas.

A quick glance at the screen reveals five reels, but you will soon see numbered paylines up to 25 indicated at the sides of the reels as well.

The game is from Wager Gaming Technology, and they tend to allow you to choose from a very wide range of bet amounts. You can start with a cent bet on each line if you like, which makes the lowest total bet for all lines just a quarter of a dollar. If you want to play the maximum bet, it would take $250 per spin to do so.

Well, of course, the monkey is the substitute, wearing a rather cool Hawaiian shirt! He can pay the biggest prize for getting five on a single payline, at 5,000 coins. He will also substitute for all but one of the other symbols. The only one not to be substituted by the monkey is the banana. This appears half-peeled and can pay for two or more appearing anywhere. However, three or more will also win you a number of free spins.

Will you get to play a bonus round in Cool Bananas slots?

You will get to play 8 free spins if you get three or more bananas in one spin. This is a lower amount than some other games provide, but you can retrigger it by getting another three bananas. You will hope for many prizes too, as their usual values will be tripled during free spins.

Download and enjoy a game of Cool Bananas today!

Whether you liked the original King Kong movie or not, this slot game clearly nods to that theme and uses it to inspire its own more cartoonish theme. We liked it, and it certainly provides some fun as you spin. Why not see if you can spin some prizes into sight by playing it today?
Play Now